When writing thank-you notes for my wedding gifts, I found myself in an awkward situation. I could not remember if I had sent a thank you note for a particular gift.

I did not write all of the thank you notes at the same time. I was also mailing them as I wrote them but I was not marking off which notes had been mailed. I was checking off each note as I completed them. Or a thought I was. At the beginning of one session, I got paranoid about where I had left off.

When writing a batch of notes, I was unsure if I had written a note for a particular gift. Did I write it and forgot to check it off the list? I didn’t want to not thank someone (I still haven’t thanked someone for the mini crock-pot…read about that blunder here).

At the time, I felt it was easier to send a (potential) second thank you note. In retrospect, it would have been less stressful if I had asked the couple if they had received a thank you note from me.

This was over 15 years ago and I do not recall what the reaction of the couple was. Maybe they did not say anything about it. Maybe they just thought it was weird. But I never forgot it. I hope you never end up in this situation. Sending two notes to the same couple was awkward!

What you can do

Be organized when writing your thank you notes. Use lined paper or create a document in Excel to track your gifts and who gave them to you. Be diligent and check off each note as it is written and check them off again when they are mailed. Or use a thank you note tracker.

Read next: How to say thank you for a gift

About The Author
Heidi has been writing thank you notes for more than 30 years and is the author of A Modern Guide to Writing Thank-You Notes. Her goal is to help people write better thank-you notes by providing tips and examples.

This content may contain links to products. Please assume all such links are affiliate links which may result in Heidi (The writer of this site) earning commissions. 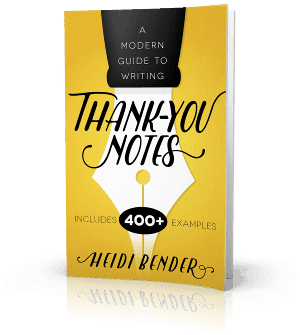